(These are entries from my blog from 2000 and early 2001. They were originally hosted on a small server at Macquarie University. Most of the links are dead now, but I have kept them as they are here, for nostalgia’s sake.)

5:45 PM ~ Christine and I are heading off to Toronto tomorrow. This log is going on hiatus for a couple of weeks. Expect some pictures when I get back. (Can you tell that I have a digital camera? We're only minding it for our trip overseas. It goes back to its owner when we get back, alas.) 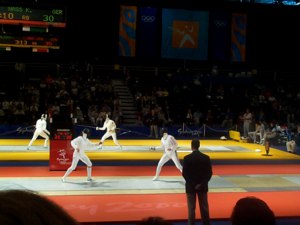 I think that I'm not really allowed to post this picture, as I'm not an Olympic broadcaster or journalist. But, what the heck, I'll live dangerously.

I'm back from the Women's Team Epee quarter- and semi-finals: Russia and Switzerland are off into the Gold medal round tonight, and Hungary play China. I think the Chinese were the surprise package -- they whipped France, and the French looked rather shocked about it. Similarly, the Russians beat the Germans, and then rounded it off with a 46-45 win over the Hungarians (who were going in as the favourites). It was a great way to be introduced to fencing, with four bouts going on at once at the start, and then two at a time to decide the ranking of those placed 5 to 8, and to decide the Bronze and Gold matches.

Darling Harbour is buzzing, with live music and lots of events. The transport system is even holding up too, so it looks like the Apocalypse might result in few immediate ill effects.

3:59 PM ~ Why does the fact that the tub of icecream in my freezer bears a use-by date of August 2002 leave me queasy? 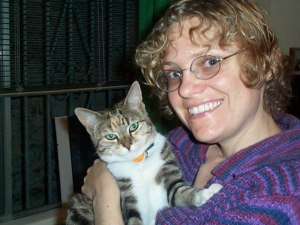 I was looking for the current rules for epee. I didn't expect to find this. I'm impressed.

9:24 PM ~ I don't really follow this stuff, but that men's 4x100m freestyle relay win was Something Special. (The boys are obviously Very Happy at breaking the US winning streak.)

4:17 PM ~ Listening to NewsRadio today, I noticed that they're giving time calls and weather conditions in Dili, as well as for all the state capitals. I wonder if the broadcasts can be heard up there in East Timor? (Well, I know that you can hear NewsRadio everywhere on the 'net, but I'd be surprised if there many of the population in East Timor have great 'net access.)

10:52 AM ~ Interesting Fact #4: A comathematician is a device for turning theorems into coffee.

Disclaimer: You probably need to know both some category theory and some Paul Erdös to get the joke.

9:35 AM ~ Fontomas.com: One free font a week. No archives. Visit regularly, if you want well designed display fonts. 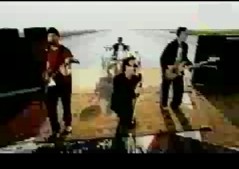 Well, it didn't take long #2. First the mp3, now the entire video. Yes, the video clip of U2's as yet "unreleased" Beautiful Day is online.

7:50 PM ~ For a week without any teaching, it sure is hectic. It might have something to do with the impending apocalypse. Anyway, with marking, writing, preparing for a trip, administration, and all of the extra curricular activities I seem to get myself entangled in, updates here might be rather scarce.

On the other hand, they might be all the more frequent, if my avoidance reflexes kick in.

9:28 AM ~ Kraftwerk: Pocket Calculator: By pressing down a special key it plays a little melody.

10:10 PM ~ Quick! We've got just two days to get to the socialist utopia described by Edward Bellamy. (The protagonist, Julian West, awakens from a deep trance-like sleep in September 10, 2000, in an idyllic and glorious Boston.) 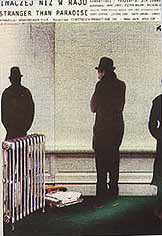 I never knew that was about the troubles.

According to the article the discount only applies to DVDs at present, though there's no assurance what crazy pricing mechanisms they'll be able to apply whenever they want. Think about it: the store is a big computer program. It's easy to change prices and to let prices be a function of any data you've got on each individual buyer. It's much easier than relabelling stock in an honest-to-goodness shop. I think we can expect to see more variable pricing schemes in future as e-businesses attempt to eke out as much revenue as they can on their bare margins.

Actually, I'd like to think that we could see it happen in the future, but the problem is, it's really hard to see it in action. The way Amazon implements the scheme, it's almost invisible. I see the prices I see when I browse. I don't see the prices you see when you browse. However, it's not impossible to sidestep the scheme. There's a way to fool Amazon into treating you as a first-time buyer too. Just trash your cookies and restart your internet connection, or visit Amazon from a machine which hasn't been used to visit Amazon before. (Just don't log in with your old log-in information, or it will recognise you as a previous buyer.)

I called this process "fooling" Amazon, but on reflection, I don't think that doing this this is fooling them at all. If they haven't told us that this is a discount for first-time buyers, then we have no assurance from them that this is not a discount for buyers-from-computers-of-which-they-have-no-records-of-on-their-computers. (After all, that's what the software detects. It doesn't detect whether or not I've bought from them before.) And that discount is something we can all enjoy.

Can one who claims that this world began from and in chaos (ie. without any order, purpose or design) apply logic and reason to his/her discussions about it?

The answer is, of course, yes. A person who claims that the world has no order, purpose or design can of course reason as logically as anyone else. They can do whatever everyone else does, I suppose.

Before I go on to answer it, I should complain just gently about the running together of "without order", "without purpose" and "without design". I think these things can all come apart. Something can have order but no design (raindrops fall in an order, but aren't designed to -- or at least it seems possible that they aren't designed) something can have design without purpose (in any ordinary sense of "purpose" -- think of purposeless pieces of art) and many people think that things can have purpose without design (many think that biological systems are like this -- a heart can be for pumping blood even if no-one intended it for that). None of these examples are uncontentious of course, but it begs way too many questions to assume that the three terms stand or fall together. But, back to the question at hand: can a person who believes that the world is orderless, purposeless and designless still be committed to logical reasoning?

The answer I prefer for this question is the generous one. Of course a person who believes that the world has no order, purpose or design can reason logically. Why think that the application of reason only works in an ordered, or purposeful or designed system? We can reason reasonably about chaos, just as well as order. Take the person who is agnostic about the purpose or the design or the order in a situation -- they can still reason about it regardless. Logic is the story about what follows from what in all situations. It's true of every situation (both the designed, ordered and purposeful ones, and those that are not) that both premises:

are true, then so is the conclusion is true too. That's independent of any order, purpose or design, as far as I can tell. It's just the inference of modus ponens, and many people think that it tells us more about how "if ... then ..." works than it does tell us about how the world works.

Now, it's open to you to say that if a situation satisfies modus ponens and other kinds of logical inferences, then there's order there and then. But that's way too cheap. If you want to call that order then more power too you. But don't you dare attempt to infer from this that there's design or purpose or any of those more robust features. Had the world been uncreated or had it all been a purposeless cosmic accident then modus ponens would still work. That's logic!

There. That got that off my chest. Let none of this lead you to infer anything about my opinions on whether the world as a whole is designed or ordered or created. I don't think that a commitment to logic alone is going to get you to that conclusion. Other things may well do that. Of those other things, perhaps more will be said later.

(This little rant can be seen as an appendix to my earlier thoughts on logic and faith. Perhaps I will merge them one day. comments, of course, are always welcome.)

8:17 AM ~ Totally Tessellated: Tessellations for fun and profit. Or at least for looking at and admiring. I especially enjoy dissection tiling. Perhaps for the bathroom tiles?

6:36 PM ~ ... a new design magazine. Reviewed here by the nice typography folks at Microsoft. (Also from them, news of Nina, a new condensed font in the same family as Verdana.)

The need of a constantly expanding market for its products chases the bourgeoisie over the entire surface of the globe. It must nestle everywhere, settle everywhere, establish connections everywhere.

One day I'll have to put down in writing what I think about how much of dialectical materialism has turned out to be true of this world we live in. But today's not that day.

I've shamelessly stolen today's image from Michael Tunn's Big Fat Games weblog. Now I have some idea of what those helicopters were doing that Saturday buzzing the harbour while we were making our way home from Manly in a leisurely fashion.

I don't know what to make of our Police Commissioner, according to this quote:

"We expect Sydney to be a very safe city," said Peter Ryan, the police commissioner for the state of New South Wales, who is in charge of security for the Games. "We have literally planned for every possible contingency."

Now, I don't know a lot about contingency planning, but I do know that there are a lot more possible scenarios than one can plan for in just a few years.

11:00 AM ~ The University as Business. A daily news site for what the owners describe as the education revolution.

10:41 AM ~ Life ticks on. Today, inbetween all of the other stuff, I'm thinking about relationships between proof theories. In particular, delabelling labelled proof theories. That probably doesn't mean much to you. The problem is, it doesn't mean too much to me yet either. I know what I want to do, but I don't know how to articulate it. This job fits in nicely with all the other non-intellectual tidying up I need to do.

8:34 AM ~ This post captures my recent thoughts on document presentation.

TeX has the amazing feature that it can accurately capture the structure of the document, yet render completely consistently on all platforms, allowing great artistic control over layout. The relative popularity of HTML over TeX is of course evidence that the world is unfair.

That post from Raph has also got some helpful comments on this page about PDF and e-books.

5:02 PM ~ There were lots of posts yesterday, and lots fewer today. Life's like that. Ups and downs, quicks and slows, busy and lazy.