Isn't "paraconsistent logic" as far removed from reality as the most far-fetched of post-modernist hokum? If so, why have you kept silent regardng those who allow that a proposition may be both true and false (at the same time and in the same respect)?

Is this irrational doctrine any the less to be deplored because it issues from the mouths of influential logicians? If not, why haven't you censured those responsible for this irrationalist hype? Could it be because their backers include the Association of Symbolic Logic and the editors of _Mind_ and _Logique et Analyse_?

O warriors of science: what will you do, now that the dialethic disease has taken root in mathematical logic? Will you recognise that the apostles of inconsistency are the vilest of charlatans? Will you indict your own kind for mathematical decadence, for having gotten in bed (many for grants) with the henchmen of this nefast movement? Or will you find some pretext for justifying an intellectual licentiousness that you would have lost no time in repudiating had it been indulged by post-modernists?

I'm finding that my satisfaction with my work day is inversely proportional to the amount of surfing I do while at work.

That's everything on random play.

"If a German philosopher emulated Dummett and published a 700-page tome about Frege without a single quotation or reference, any acclaim would be tempered by ridicule." [*]

At last it's official. As of July 1, 2002, I'll be an Associate Professor in Philosophy at the University of Melbourne. Coming to the decision wasn't easy -- especially in waiting for the job to come through for Christine -- but it's all fallen into place pretty well. (Well, apart from somewhere to live, and a few other things like that.) Wish us luck!

The article Logic and Terror by A. R. D. Mathias, is an interesting short history of the tightrope that Soviet logicians had to walk in the last century. Stalin was a smart guy. The qualities of intelligence, power and viciousness are a hard mix to deal with.

It is generally recognised that no science can develop and ourish without a battle of opinions, without freedom of criticism. But those generally recognised rule was ignored and outed in the most outrageous fashion. A tight group of infallible leaders, having insured themselves against all possible criticism began to act arbitrarily and highhandedly. To give one example: the so called Baku course, by N.Y.Marr, unreservedly included in the lists of manuals recommended to students. This means that the students were deceived by having a rejected "course" presented to them as a first class text-book.

If I were not convinced of the integrity of comrade Meshchaninov and the other linguistic leaders, I would say that such conduct is tantamount to sabotage.

If my own vice-chancellor involved herself in my setting of my course curriculum to this extent, I'd be worried. If it were Stalin, I think I'd get out of the profession and work as a manual labourer instead.

Sleepytime, a CD highly recommended to those with small kids in need of some soothing auditory atmosphere.

What would you have done if you were in the shoes of the professional philosophers, in the Mystery of the Millionaire Metaphysician? That was the question I asked of myself when I read the story.

Tasmania was a blast. Lots of fun, lots of philosophy, lots of good conversation. It's a good time to be active and thinking and working.

Things have been quiet on the website front, but hectic elsewhere. Hot water systems needing replacing (and the saga taking three days), Zack going through a sleepless phase (which seems over for the moment, at least), floorboards in the dining room popping because of wet weather and bad ventilation, and work, work, work. More activity seems to be happening there than here at present. 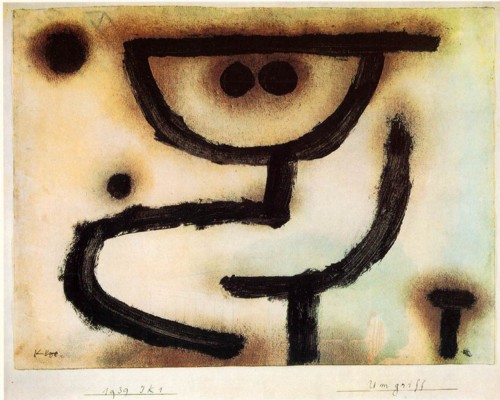 I'm in Tasmania for the 2001 Australasian Association for Philosophy Conference, and in particular, for my logical pluralism stream. It's way too much fun to be spending any time here. Enjoy an embrace from Paul Klee in my absence.