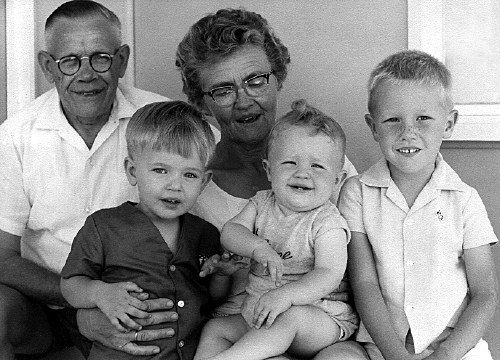 Last Monday, my last surviving grandparent, Johanna de Vries, my maternal Grandmother, passed away at 1:30am. Today I fly up to Brisbane to attend her funeral, and to grieve with my family.

Discussions like these, on the uniquely internet discussion phenomenon of flaming make me wish I knew more about rhetoric than I do. That, and the perceived "dumbing down" of public culture (particularly of discussion about politics).

You'd think that a philosopher with more than a passing knowledge of logic would have something sensible and productive to say about what makes public discussion good. But I don't have much to say. I'd like to, one day. Does anyone have any ideas of what other things would be good to read to get up to speed in the area? If so, please let me know.

To help Roberta celebrate my arrival, our chivalrous and irreproachably well-mannered landlord had bestowed upon her two hard-to-come-by tickets to the Bolshoi.

We went the following evening. Gisele was on the program, the same ballet I'd seen performed five years ago during my first visit to Moscow. At that time the theater had been shabby, with grimy scaffolding from ongoing renovations concealing its fissured neo-Romanesque façade. The work had since been completed, the cast-iron chariot and four-horse cortege over the portico was meticulously restored, and the whole majestic front was splashed with cozy, pink light.

The audience had also undergone a remarkable transformation. Gone were the graying American retirees in Bermuda shorts and sensible shoes, the camera-clutching tour groups from England, and the prim Muscovite mothers, who had no doubt scrimped so that their daughters could see Russian culture in its highest form. In their stead sat row upon row of American and British bankers, lawyers, and accountants in somber, fashionable suits. Those Russian daughters, I could not fail to notice, had grown up in all the right places. They snuggled with the emissaries of foreign finance, and shot one another catty, competitive glances.

Mobile phones chirped, rang, and buzzed incessantly throughout the performance, while hushed conversations in several languages echoed from the four corners of the gallery. I understood now why Mikhail Mikhailovich had told Roberta he never went to the ballet anymore. Yet I did not find the vulgarity repulsive. It was tantalizing, theatrical. Even the sinewy ballerinas fluttering about the stage were either too wrapped up in their routines to complain about the ruckus or had long ago realized that the real show at the Bolshoi was now the audience.

I'll be posting some details of photos I took in my week in Helsinki, over the next few days.

I wish I had seen this collection of photos before making my trip! It would have helped me decide what to go to search out. (And I would have made a trip into the library had I known it had that ceiling! It was just next door to where I was teaching.)

I had a wonderful time in Helsinki. It was good to meet lots of people I had email corresponded with, and plenty I hadn't. Most fun were the crazy Russian students: Hi Dmitry, Anna, Valentin, Ivan!

More later. Now to catch up on those emails and the pile of work waiting for me here.

Today Sydney, tomorrow Helsinki. It's a long, attenuated day today, with stops in Singapore and London. I start teaching on Monday, and stop on Friday, then get on the plane Saturday morning to return home early on Sunday. It's a crazy timetable, but somebody's got to do it.

Expect a raft of pictures from Helsinki, if all goes well. Not next week, but sometime after that.

The history of the distribution of a worm: The "Code Red" worm is a pretty active beast. Since July 20, I've had 274 different attacks. The logs show the story: there was a short burst on July 20, one on August 1, and then the flood. Each was exactly the same request string: Until August 5, when I got hit by a new strain, involving a string of Xs, rather than Ns.

It doesn't look like it's going to let up anytime soon. It's a good thing that I'm running Apache and not a webserver vulnerable to this worm.

"Partway through Elliotte Rusty Harold's talk about namespaces, I realized where this relentless drive toward abstraction was taking us. Every new level of abstraction draws the computer-based world closer to the concepts we talk about in the real world. We've moved from waves to bits to data to information to infosets to application objects. As this process continues, some ambitious Comp Sci graduate student will realize that somebody already created the tree structure mapping the highest level of reality. That person was, of course, G. W. F. Hegel. Hegel's dialectic led him to create a map of reality that, at the top of the tree structure, divided everything into either the material or the spiritual realm. That dichotomy was resolved in God, and, my friends, that's about as far as you can go.

"That ambitious Comp Sci grad student, eager to get his Ph.D. and begin making real money, will create The Two Final Infosets: MatterML and SpiritML. Then, late one night, as rain falls in torrents and lightning flashes outside his laboratory windows, he'll run XSLT to transform the material world to the spiritual world. We'll be gone. The last material object on earth will be that graduate student's open copy of XML in a Nutshell. It makes an editor in chief proud, in a perverse kind of way."

a break in something where there should be continuity an opening or aperture in an organ, for example, the opening in the diaphragm for the oesophagus a break in pronunciation between two vowels that are next to each other in consecutive syllables without an intervening consonant, as in "re-examine" a gap where something is missing, especially in manuscripts

Enjoy the break. My writing energies for the next little while will be spent elsewhere.
← News from July 2001 | News Archive | News from September 2001 →